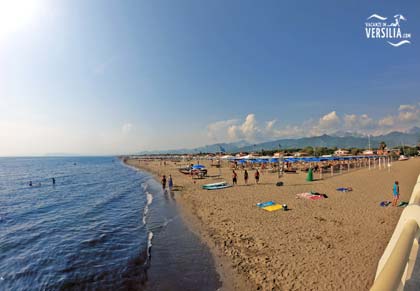 More than 20km of promenade with beaches, restaurants, hotels and cocktail bars.

The Versilia coast instead, that is touristically known as the destination for a journey on the sandy beach and for having fun at night, extends from Marina di Massa to Torre del Lago, an extension of 20km. In the past Versilia was famous because it was considered an holiday destination by a lot of VIP. Subsequently this kind of tourism became more relaxing and comfortable, givig guests the opportunity to go to equipped bathing establishments with cafés, swimming-pools, restaurants, cockatil-cafés, fitness areas and entertainment areas for children. Hotels got more comfortable too and they tried to let each guest satisfied.

Nightlife attracts young people: pubs, restaurants, discoteques, beach parties, local famous clubs like “Bussola” in Focette and “La Capannina” in Forte dei Marmi are located along the coast and during summer there is a transport service called “ VERSILIA BY NIGHT”, that links to the MOVIDA by night and let people to move without any dangers.

In Versilia You can also find a cultural tourism that shows natural and artistic attractions.

Pietrasanta has become a national and international exhibition space, especially for contemporary art, thanks to Sant'Agostino Church of 1300, that offers several exhibition rooms and to the Cathedral square and the cloister.

In TORRE DEL LAGO, on the river of Massaciuccoli, there is an open theatre near Puccini Villa, where during summer THE PUCCINI FESTIVAL is played: it is a musical summer festival that shows Puccini's concerts and operas.

The CITTADELLA OF CARNEVALE OF VIAREGGIO, where there are all the hangars in which carnival wagons are built and preserved and where You can visit two museums and an historic documentary centre about the history of Carnival of Viareggio (144 years).

The VILLA MEDICEA in Seravezza, composed by the Palace, the Stables, the Chapel and the garden, was the ancient residence of Cosimo I De Medici, during his visits to marble caves. Today it is the seat of the Town Hall and offers several rooms to expose artistic exhibitions of modern and contemporary art. From 1996 here, there is the The Work and Popular Culture Museum of Historical Versilia.

Tuscany and its world famous hinterland nearby.

Moreover, to get from Versilia to other famous and important cities like Lucca it takes only few minutes by car: in Lucca there is the important LUCCA SUMMER FESTIVAL, where international singers, bands and artists perform every year, and there are also lots of wonderful villas to visit to.

PISA and its stunning PIAZZA DEI MIRACOLI with its leaning tower and the natural park of MIGLIARINO and SAN ROSSORE is another fantastic place to explore: the park is a protected natural reserve with a wooded area that extends from Lucca to Massaciuccoli. Furthermore, in this park You can see a lot of different species of flowers and animals during a relaxing walking.

Versilia is not just sea and beach.

So Versilia is not only sea and beach: If You turn your back You can admire our ALPI APUANE which from the famous marble is extracted. Do not miss the opportunity to visit the Fantiscritti Cave of Cararra: it is possible to visit the cave and the museum of the history of marble, too.

If You want You can also discover and visit the CORCHIA MOUNTAIN where You can reserve some walks with ambiental guides.